Back in October 2010, I had the distinct privilege of witnessing something truly amazing in the horror community: The birth of a grassroots "cosplay" event that would eventually grow to become the Northeast's premiere zombie-themed extravaganza. It was the Saugerties Village Invasion Zombie Crawl, conceived and hosted by the one and only Captain Cruella of the Carnivorous Cadavers. I got to cover the event for Fangoria, and enjoy the proceedings with a little glimpse behind the undead curtain, if you will. In a word, it was thrilling.

And now, fast forward two years, and yours truly is officially a part of the event itself, as the 3rd Annual Village Invasion, like W.B. Yeats' rough beast, slouches toward the Village of Saugerties to be born. Things are moving quickly, as this unique event takes shape, and I've got a front row seat for it all.


So what is this Village Invasion, you may ask.

Well, it happens to be an event which takes place every year in the heart of Saugerties in New York's Ulster County. Masses of zombie fanatics come dressed in their ghoulish best and mob the streets like a scene from Day of the Dead or any of your other favorite living dead opuses. Local businesses stay open all night, offering specials to the passersby. Live music, public readings...you name it. Take a pub crawl, add in zombies, expand it to the tenth degree, and you can begin to get a notion of what the Village Invasion Zombie Crawl is all about. 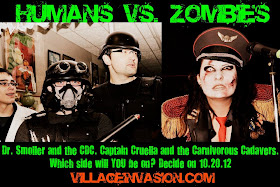 This year, the whole thing is literally bigger and better than ever--and that's not just hyperbole. The good Captain has an official sponsor this time--the Village Apothecary, located right in downtown Saugerties. It's owned and operated by Neil "Chip" Smoller, who has swooped in to help take the Invasion quite literally to the next level this year, with billboards, radio spots and more in the works. The newly minted Invasion board of directors also includes one Perri Naccarato, who has become known by Invasion partygoers for the vintage horror flicks he projects on the massive wall outside his store, The Computer Guys.

In fact, Village Invasion is now officially a non-profit organizaiton, and the whole shebang will be raising money to help rebuild and revamp Small World Playground, a local spot frequented by kids from the Boys & Girls Club and other tykes in the surrounding vicinity. In short, it's caring through sharing, folks, and what red-blooded horror fan wouldn't want to be a part of that? 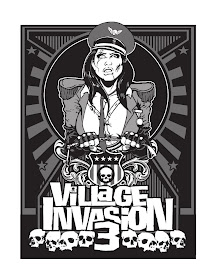 So when is it happening?

Glad you asked. That would be Saturday, October 20, from 6 to 11pm. This year, the streets of downtown Saugerties will be closed off to automobiles, meaning the zombies will have free reign to roam like never before. And given the annual tradition of the costume contest, that means competition will be hotter than ever as these wannabe ghouls high-step it around town. Past years have given us some outrageous ghouls indeed, so I'm pretty curious as to what our costumed meatbags have in store this time around.

Nearby hotels will be filling up fast, so if you're looking to stay the night, start thinking about getting a room (the local Comfort Inn will actually be setting up a special event rate, so stay tuned for that.)

If you'd like to find out more about the Village Invasion, the brand new website is now live (though still being "fleshed" out.) There is also a new Facebook page, as well as an official Twitter feed you can follow. Check them out here:

And as always, feel free to keep tabs on Captain Cruella herself through the various online domains in which she has her meathooks, from Facebook to Twitter to the Cruella's Crypt blog.

Thousands of people are preparing to descend upon Saugerties for the biggest zombie confab this side of the Monroeville Mall. It will be an event you won't want to miss--truly Bigger, Badder and Bloodier than ever. I'm honored to be a part of it, and I hope to see you there!